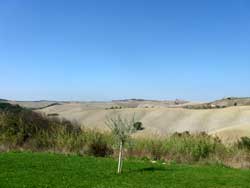 Sienese territory is rich in country towns grouped in small villages surrounded by bucolic-pastoral environments timeless. The landscape appears as a kind of paradise, perfectly balanced in every aspect, characterized by a mild climate throughout the year, and the wine: a true hero of the Siena hills.

The Chianti Colli Senesi is enjoyable in every aspect, with its country roads, hundreds of hectares of forest and vineyards. It is the largest production area of Chianti in Tuscany, with three distinct areas: the area of Montalcino, Montepulciano and the surrounding San Gimignano.

The hills are the Siena Chianti area history, which includes the towns of Castellina in Chianti, Radda in Chianti and Gaiole in Chianti, which is the old League of Chianti, then transformed into Provincia del Chianti.

Chianti Riserva: Wine aged for at least 2 years before being bottled.

The area Chianti was defined by Cosimo III in 1716 as an official wine region, and defines its boundaries. Chianti today goes back to the period after 1860, when it was called the classic formula for this wine Bettino Ricasoli, second Prime Minister of Italy.

Given the large size of the territory, and the mixture of white grapes with red ones imported from the south, the wine quality and style varied enormously across the region areas affected. This led to a crisis in which several producers brought fine wines as simple table wine, a situation that improved with the endorsement to Chianti DOCG in 1984.

The area involved in the Chianti wine culture is divided into seven areas of production: