City of Etruscan origin, was founded as a Roman colony at the time of Emperor Augustus with the name of Julia Saen.

The first known document in which mention is made of the Siena community dates back to 70 AD by Tacitus.
In the IV book of the Historiae, Tacitus writes about the senator Manlio patru, which reported to Rome that he was beaten and ridiculed with a fake funeral while he was on an official visit to Saen Julia.
The Senate puni the main culprits and called the Siena community to a greater respect for authority.

Around the X and XI century, Siena is at the center of important trade routes through the bishop's power following the Carolingian period. At that time expanding their territory and running out the first alliances, becoming an important medieval city in terms of both political and economic.

This led to a bitter quarrel expansionary against the Florentines in the fight for the domains of northern Tuscany. There followed a period of great prosperity for the city of Siena, becoming an important commercial center thanks to the excellent relationship with the State and the Church.

Towards the end of the twelfth century Siena clashed again with the Fiorentini Guelfa part because of its position in support of the Ghibellines. After a good start, Siena had the worst and lost the war at the Battle of Colle Val d'Elsa, who led the rise of the Government of the Nine until 1355.

Under this government, Siena reached its peak in terms of both economic and cultural. Towards the end of the fourteenth century began the slow decline of the Sienese Republic, marked by the plague of 1348 that decimated the population and reached its culmination in 1555, when the city had to surrender to the supremacy of Florence under the control of the de 'Medici. 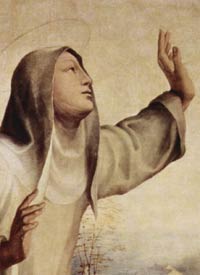 One of the most illustrious of Siena is without doubt St. Catherine, born March 25 1347 (Day of the Annunciation). Her name was Catherine Benincasa, the daughter of a dyer, had the first vision already at the age of 5 years and took the veil to eight (some 16). The family opposed harshly against his choice, but his strength of mind was such that it does not allow anyone to hinder his choice.

Catherine Bonincasa spent three years in contemplation and in absolute silence, before it has a mystical vision. From then on his mission took place in the city right out by the plague, with relief to the sick and the poor and dedicating much of his time in politics with his intervention could prevent Siena and Pisa to join with Florence against Pope Urban V, and did so to bring it back to Rome (the first was in Avignon).

And 'here he obtained the ultimate Dominican dell'ideale: the union of the mystical life and practice. Finally, Katherine went back in his hometown, Siena, and again his life of contemplation, visions, stigmata, and his political opinion is just with making attempts to remedy between the pope and antipope. He died in Rome in 1380, was canonized by Pius II in 1460. In 1939 he became patron saint of Italy together with St. Francis.

Guido da Siena was the founder of fortunatissima Sienese school of painters. Of his life we know almost nothing and many facts are shrouded in mystery today. Certainly one of his paintings is in the City Hall and is dated 1221, but some critics and scholars believe that the date has been altered and trace the work between 1260 and 1270, years when we know for certain that painted other works.

Yes is one of the most illustrious of Siena. Between 1320 and 1340 he spent his life in Florence, where it would have been influenced by the skill of Giotto and his pupils. The most famous of Ambrogio Lorenzetti was the "Effects of good and bad government in town and country" all'intenro guarded the Palazzo Pubblico of Siena. In this framework, for the first time you use art as a secular and educational tool, where the landscape is used as an integral part of representation and not as a mere background against which support the main figure. A Massa Marittima is a beautiful altar. 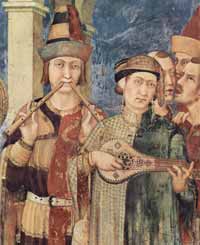 It was certainly the most important Sienese painter, a pupil of Duccio di Buoninsegna especially influenced by Giovanni Pisano and the Gothic sculpture of the Alps. His successful career began with a fresco made on the same level of Majesty by Duccio, preserved in the Palazzo Pubblico di Siena.

The awards were not long and the King of Naples, Robert d'Anjou, he did call to paint frescoes go here developed his style that made him famous throughout the world, graceful and sinuous shapes in a refined and elegant style. Around 1330 he returned to Siena, where did the portrait of Guidoriccio by Fogliano, although some scholars believe doubtful authenticity.

In Assisi, however, painted in the Lower Basilica cycle "Histories of St. Martin." Another important work is the magnificent "Annunciation", painted for the cathedral of Siena.

In a Siena Holidays