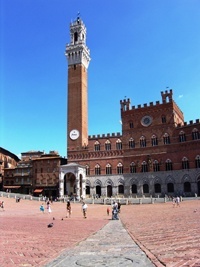 Famous worldwide for its architectural beauty and its particular form a "shell" slight height difference lies in the junction point of the three hills on which stands the city, Piazza del Campo each year attracts millions of tourists from around the world.

The earliest date back to 1169, and cover the whole valley, including even the nearby Piazza del Mercato, from which the square was divided in 1193.

The profile and structure of Piazza del Campo were not established a priori, were outlined in time, through laws enacted by the government of Siena to define spaces, facades and architectural fronts, which have also drawn the profile and the perimeter of the square that we all know.

This is the fountain located at the highest point of the square: he was named to remember the joy of Siena when the water flows for the first time in Piazza del Campo. The fountain covers an important artistic value for the entire city made of marble from Jacopo della Quercia with a series of statues and bas-reliefs between 1409 and 1419, is considered one of the greatest artistic and sculptural expressions of the fifteenth Italian. Today the square is a copy of the fountain, designed by Tito Sarrocchi in 1869. The original marble are kept within the Hospital del Museo di Santa Maria della Scala. 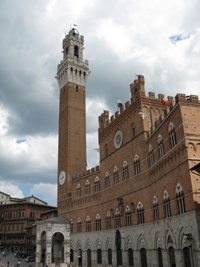 Built between 1288 and 1342, is one of the most elegant and imaginative examples of Gothic architecture. It was the seat of government of the Nine. Today houses the Museo Civico and the administration of Siena. Inside the Museo Civico have kept many masterpieces of Siena, which frescoes, paintings and sculptures.

Towards the first half of'300 was built hall of the Great Council, which were then added the two bodies side. The central body of the facade is divided into three levels, while the two wings. The bottom of the building is marked by characteristic Sienese arches, decorated by un'ogiva that contains them. At the center of the facade is a place copper rose window depicting a monogram of Christ placed in 1425, reprimand of San Bernardino.

On the left side of the Palazzo Comunale, is the Torre del Mangia, a lean and elegant brick building high 88 meters with ornaments made of stone, perhaps drawn by the famous Philip Memmi and built by perugini Francesco Di Mucci and Rinaldo.

From its summit, reachable by four hundred steps, you can admire a magnificent panorama with views directly on the square and the rest of the town. The name of the tower is due to his first Campanario, Giovanni di Duccio, said Mangiaguadagni.

Inside are some of the most important masterpieces of art Siena. The largest room, known as the World Map, are preserved two masterpieces by Simone Martini: Guidoriccio from Fogliano all'assedio of Montemassi and Majesty. The rest of the hall is decorated by the wonderful frescoes of Old and Sodomia.

In the adjacent room, the Sala della Pace, one can admire the famous frescoes of the now famous scene of the Effects of Good Government and Bad government, spectacular example of political allegory. Inside the museum there are many important works by Bernardo Rossellino, Domenico di Niccolò, Jacopo della Quercia, Spinello Aretino and Domenico Beccafumi. From on forget the wonderful sculptures of the famous John Duprè and many other artists.